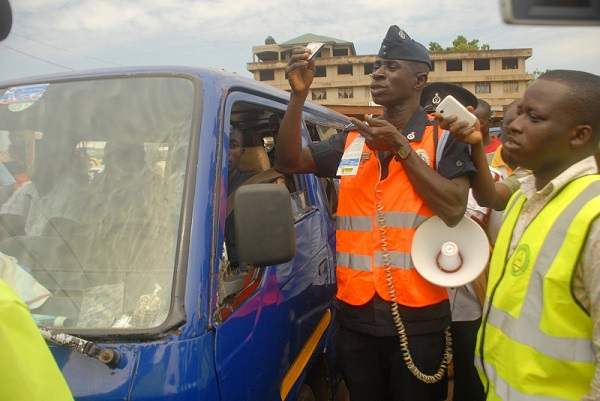 A few weeks ago, I saw eleven facts on traffic rules which sought to educate users of the road, particularly drivers. This was virally shared on social media platforms and had no source. In this article I will attempt to correct the position of the law as it applies in Ghana with particular reference to the Road Traffic Act, 2004 (Act 684), Criminal and Other Offences (Procedure) Act, 1960 (Act 30) and Road Traffic Regulations 2013 (L.I. 2180).

No traffic officer is allowed to get and keep your license, they are only allowed to get your details off it. You are not required to have a category (professional driving permit) if you are driving a vehicle for private use.

This is false. A police officer in uniform and not below the rank of an Inspector, may where necessary, retain your driver’s licence for the period that that licence is required and is mandated to issue an official receipt for the retention of the license.

In addition, driver’s license in Ghana is categorized into six classes subject to restrictions which are specific to the holder of each class or as the Diver and Vehicle Licensing Authority (DVLA) may specify. Thus, a holder of a particular class of license can only possess another class after passing the relevant and appropriate test conducted by the DVLA.  For example, if you possess a Class B licence, you cannot drive a bus.

If you do not have your licence on you, no police officer is allowed to charge you on the spot. You should be given time to produce it (according to the law its 21 days).

This is false. A person can only drive a vehicle if the person has a Learners Licence or Drivers Licence. A driver is required to carry the original licence whilst driving. On the request by a police officer in uniform or an authorised officer of the DVLA, the driver is required to produce the driver’s licence that authorises that person to drive the motor vehicle for inspection. If you do not have the licence on you, the police officer may request that you produce it within twenty-four hours at a police station or to another police officer as may be directed by the officer.

When stopped for speeding, there is an allowance of up to 8kms above the speed limit. You should not be charged for over speeding.

This false. Unless otherwise indicated by the Ghana Highway Authority, a person driving a motor vehicle must not exceed the maximum permissible speed limit. Fifty kilometres per hour is fifty kilometres per hour. There is no allowance. The law imposes another responsibility on drivers to drive a motor vehicle at speed lower than what is indicated on the road “if the actual and potential hazards relating to the environmental conditions then existing require the motor vehicle to be driven at a lesser speed”. For example, you are required to slow down at zebra crossings and traffic intersections. It is an offence to breach the speed limits.

You are within your rights to ask for the calibration certificate of the radar gun used to capture your speed.

This is False. Traffic offences are usually strict liability offences. For a crime to be committed, there must be two elements present: i.e. the prohibited mental state of the act and a prohibited act or omission, the physical element. However, in strict liability offences, you do not need the requisite mental state to prove the occurrence of a crime. For example. It is an offence to have sexual intercourse with a minor. Thus, if a person has sex with a minor, although the minor consented to the act, the person is liable although there was consent. That is strict liability.

Thus, if you exceed the maximum speed limits, you are liable. The police have a duty to inform you of the nature of the offence you have committed, the charges they will prefer against you. In addition, they are to provide before trial, all documents (which will include the calibration certificate) they intend to rely on at trial. If you have any dispute regarding the calibration of the radar gun, you can do so in court as part of your defence.

You are within your rights to ask for a police officer’s man number, which should be worn on the uniform.

True. It is an offence for a police officer when on “duty to endeavour at anytime to disguise or conceal his or her identification number, name or rank”. Consequently, it will be within reasonable limits for road user to request the name and identification number of the police officer if the number has been disguised, concealed or is not being worn.

If you feel a check point has illegally been mounted, drive to the nearest police station and handle your issues from there.

True. This is because it is only an offence to interfere directly or indirectly with a barrier if that person does not have reasonable excuse and it is obvious to a reasonable person that such interference is not dangerous. For instance, once your safety is concerned and you drive to the nearest police station you would have satisfied the requirements of the law.

They have no right to jump in your car.

True. To the extent that your car is not being used for the commission of a crime or is harbouring any proceed of crime, the car as a property is protected from any form of interference as it is reasonably necessary for public safety, the protection of health or morals, the prevention of disorder or crime or for the protection of the rights or freedoms of others.

Every traffic officer is required to greet you politely; they are a service not a force.

True. To the extent that the police is a service and not a force, one would expect that they would exercise some modicum of decorum when dealing with the motorist. Police officers are required to be of “good conduct”, with a good “attitude towards work and a sense of responsibility”. These criteria are taken into account during the promotion of a police officer. Hence, being polite and courteous to the public may go a long way to advance the career of a police officer.

No traffic officer is allowed to cause undue delay to a motorist.

True. The police cannot hold you beyond a period or time necessary for them to conduct their checks and examinations.  To the extent that a motorist is in violation of a traffic law, a police officer may inspect, impound or stop the use of a vehicle which may result in undue delay to a motorist.

It is within the law to record a video or capture photos of your encounter with a traffic police officer.

True. However, such recording must be done taking into account the rules on privacy which every individual is guaranteed under the 1992 constitution. The overriding point is that any secret recording can only be justified in law if it is for the protection of health or  morals; for the prevention of disorder or crime; or for the protection of the rights or freedoms of others.

You have up to 48 hours to report to the Anti-Corruption Bureau of any misconduct (eg receiving or demanding a bribe) by a traffic officer. Be sure you have evidence such as a video or photos.

False. There is no limitation on reporting crime in Ghana. Every citizen has duty to to co-operate with lawful enforcement agencies in the maintenance of law and order in Ghana. The Police Intelligence and Professional Standards remains an important institution in fighting the bad nuts within the police service.