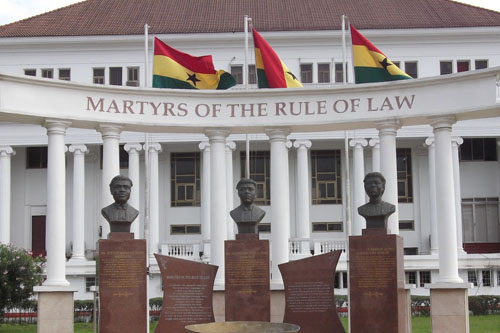 The Supreme Court in a 5-2 majority decision[1]has held that there was nothing unconstitutional in the manner in which former President John Dramani Mahama exercised his prerogative of mercy leading to the pardon of some three contemnors. As Benneh JSC speaking for the majority of the court noted, “as long as the executive [P]resident is given the discretionary power to pardon, he must have the right and privilege to exercise it untrammelled by any narrow and restrictive construction of the constitutional grant”.

This case arose from the grant of pardon by Ex-President John Dramani Mahama to three persons convicted by the Supreme Court for contempt of court. The Plaintiffs, three in all, brought an action challenging the power of the then President to grant the pardon. The Plaintiffs collectively argued that (a) the President acted arbitrarily and capriciously in exercising his discretion to grant pardon to the three convicted persons; (b) the prerogative of mercy is limited to convictions for “criminal offences” and does not include convictions for “contempt arising from the inherent jurisdiction of the court”; and (c) the manner in which the President exercised the prerogative of mercy amounted to an interference with the independence of the judiciary.

The Plaintiffs’ argued that contempt of court was not a criminal offence because it was not defined and a punishment for it had not been prescribed in written law. They also argued that since the President was himself was amenable to punishment for contempt of court, the President does not have the power to exercise the prerogative of mercy on persons convicted and sentenced for contempt.

In response to the argument that the President acted capriciously and arbitrarily in granting pardon to the 3 contemnors, the majority of the court was clear that the President’s power to grant pardon was untrammelled and the propriety or otherwise of it could not be questioned. The court further rejected submissions from the Plaintiffs’ that the prerogative of mercy is supposed to be a constitutional safeguard against judicial mistakes. In response to this view, the court noted that “…the exercise of this power in this country has never been subjected to the test whether or not there was a mistake in the court’s decision which the pardon sought to rectify.”

The Court discounted the Plaintiffs’ argument that the constitution (Article 296(c)) required the President to make regulations to govern his power to grant . According to the court, it was practically impossible for the President to make regulations to govern every scenario in which he is required to exercise a discretion. “Thus, in situations where the Constitution itself provides the safeguards … it is our opinion that the use of the said power must be viewed in the light of the safe guards…the safeguard under Article 72 is the consultation with the council of state which seems to have been satisfied”, the court noted.

Dotse and Anin Yeboah JJSC, in their dissenting opinions, agreed with the Plaintiffs that the President did not have the power under the constitution to grant the three contemnors pardon. In Dotse JSC’s view, “…President Mahama acted unconstitutionally when he sought the advice of the Council of State and exercised the prerogative of mercy to the three convicted Montie 3 and granted them Presidential pardon.” He also came to the conclusion that “the power of grant of remission of sentence to the Montie 3, constituted an unjustified interference with the judiciary and an affront to the constitution.”