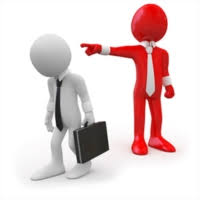 Take a newspaper. Flip through the pages randomly. You may well see an employer-sponsored notice in there together with a photograph informing the public that the subject of the notice is no longer an employee. The notice will often go on to tell the world the ex-employee no longer represents the company and as a result, persons who deal with the ex-employee do so at their own peril. This is a fairly common practice. Some ex-employees may simply roll their eyes and move on with their lives. But not everyone will take this lying down.

In the case of Eric Kwame Amoah v. Ben Owusu Domena[1], the Plaintiff sued the Defendant, his ex-employer, for a similar publication in the daily graphic. The Daily graphic publication was headed “Disclaimer.” The notice went on to say “any transaction on behalf of the above-named shop with institutions, companies, shops, and individuals by Mr. Eric Kwame Amoah is null and void.” The notice went ahead to advice the public that “any company which goes into contract with him do (sic) so at their own risk.”

He, therefore, sought a declaration that the publication in the daily graphic was malicious and reckless. The Plaintiff also sought an order directed at the Defendant (his ex-employer) to retract the offending publication in the same medium with an apology.

In determining how to construe the words in the notice, the court noted that the “ordinary and natural meaning of the words contained in the publication” must be considered.  This approach led Benin JSC to conclude that “when read as a whole [the notice], the only inference that could be drawn from the publication was that the defendant was advising all persons, both corporate and human, from transacting any business or contract with the Plaintiff on behalf of Benod Machine Shop, as same would be null, void and risky.”

The Supreme Court also noted that there was no evidence that the Plaintiff’s reputation or image had been damaged in any way.

From this case, it would seem that an employer is entitled to inform the whole world that a person is no longer in her employment. But how the employer chooses to go about this is very crucial. A notice which for instance states “Disclaimer – this scoundrel is no longer in our employ” may well expose an employer to a successful claim for defamation.

Samuel Alesu-Dordzi is an Editor of the Ghana Law Hub.
NEWER POSTReinstatements: Not Simply for The Asking
OLDER POSTRegulating The Petroleum Industry in Ghana: The Investor’s Dilemma