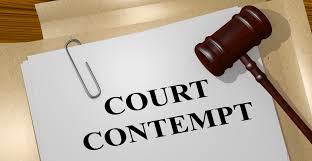 Can a Writ Breed Contempt?

The Supreme Court in the case of Republic v Bank of Ghana & 5 Ors; Ex Parte Benjamin Duffour[1]has held that a party to a suit may well be in contempt of court in the absence of formal court order. The Court stressed that a person was in contempt of court if that person engaged in an act subsequent to the filing of a case which had the effect of interfering with the fair trial of the case or undermining the administration of justice.

The Appellant, in this case, was a deputy manager of the Bank of Ghana. He was granted permission to live in one of Bank of Ghana’s apartment in a prime area. The Bank of Ghana subsequently asked him to vacate his current residence to another property. According to the Respondent Bank, the Appellant’s current apartment was to be redeveloped into a health facility. The Appellant refused to move out.

“True as their contention may be, we believe that the [R]espondent miss a very important aspect of contempt of court. They fail to consider the fact that contempt of court may arise where a party knowing that a case is sub judice engages in an act or omission which tends to prejudice or interfere with the fair trial of the case despite the absence of an order of the court.”

The Court went on to say:

“When a court is seized (sic) with jurisdiction to hear a matter, nothing should be done to usurp the judicial power that has been vested in the court by the Constitution of Ghana. In effect, the state of affairs before the court was seized with the matter must be preserved until the court delivers its judgment. This is so whether or not the court has granted an order to preserve the status quo or not.”

Samuel Alesu-Dordzi is an Editor of the Ghana Law Hub.
NEWER POSTCan an Employer Reject an Employee’s Resignation?
OLDER POSTInjunctions Over Disciplinary Proceedings – How Far and How Wide?