Book Review: The Government of Ghana and International Arbitration 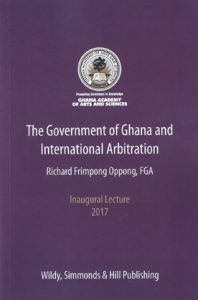 Professor Richard Frimpong Oppong of the Faculty of Law of Thompson Rivers University deserves commendation for adding on to the Ghanaian literature on arbitration. In his work “The Government of Ghana and International Arbitration”, he examines, in a deliberate and painstaking manner, a number of arbitral claims and awards made against the Government of Ghana.  And he distills some lessons that can be learned from these arbitral claims.

In justifying the essence of his work, he asserts that “to date, there has been little or no academic study on these international arbitration claims, the arbitral awards that have resulted from them, and their implications for Ghana.”

The distinctive thing about Professor Frimpong’s work is the surgical approach he adopts in dissecting the various arbitrations that Ghana has been involved in. He relies on 16 of such cases. And his conclusions are revealing.

He touched on the question of transparency. Or the lack of it when it comes to arbitral claims involving the government. In his view, the secrecy in which some of these arbitral awards are shrouded is problematic especially when most of the claims involve publicly funded projects. He suggests that as many details of these arbitral proceedings and awards should be made available to the public.

Professor Oppong goes ahead to touch on the composition of the legal teams for arbitrations involving Ghana and Ghanaian law. His conclusion on this point is hardly surprising. He notes: “In all of the claims, foreign law firms were hired to prosecute the government’s case.” He underscored as well the high costs associated with the reliance on foreign law firms, even though he was quick to point out that these firms bring on board significant levels of experience in arbitration.

He concludes that “these are significant lapses and defaults that proved costly and should definitely be avoided in the future.”

As part of his evaluation of the Ghanaian experience, he deplored the fact that Governments have not shown much interest over the years in the determination of who gets chosen as an arbitrator. According to the Learned Author, “the opportunity to ‘influence’ an arbitral panel through the exercise of a party’s right to appoint one member of the tribunal should not be declined lightly.” He continued: “It is trite that parties often select arbitrators that are more likely than not to rule in their favour or understand their perspective.”

Professor Oppong also identified poor transition arrangements and the desire of new governments to undo prior contractual arrangements as accounting for some of the arbitration claims against the government of Ghana.  He noted that: “one cannot help but notice that some of the claims were founded on decisions taken after transition to a new government, and a decision to review or terminate the contract in dispute awarded by the previous government.”

He visits the tension between the courts and arbitral tribunal later on in his work by focusing on the selective application of the Ghanaian case law by these arbitral tribunals. He addresses this in the context of the manner in which principles of international law are used by arbitral panels to overcome the effects of constitutional provisions and decisions of the courts of the Ghana Courts. He does a good job at identifying some of the devises used in evading the effects of constitutional provisions. “These devises range from what appears to be outright rejections of aspects of decisions of the supreme court of Ghana to the invocation of general principles of international law, such as good faith, estoppel, and legitimate expectations”, he noted. For him “an arbitration tribunal cannot refuse to follow the law as laid down by the Ghanaian courts if the applicable law to the contract is Ghanaian law.” He, therefore, called on “international arbitrators to take Ghanaian laws more seriously where, in a contract between GoG and foreign private persons, Ghanaian law is designated as the applicable law of the transaction that gave rise to the dispute.”

He was helpful enough to touch on the subject of the enforcement of arbitration awards. He stated that even though an “arbitration agreement implies a waiver of immunity on the part of the state party to the agreement”, the same cannot be said, “when it comes to the enforcement of the eventual award, as government often enjoys immunity from execution against defined assets in most legal systems.” He also observed that the enforcement of arbitral awards against the government outside the country was “legally and practically more viable than enforcement in Ghana.” The recent attempts by Balkan Energy to attach the shares of the government of Ghana in AngloGold Ashanti in South Africa is one of such examples.

He concludes by calling on the Government of Ghana to be more proactive in all aspects of arbitration proceedings “once an international arbitration claim is submitted.” This call has become necessary because “there have been instances in which GoG’s participation in arbitration proceedings has been unsatisfactory.” He also called on the government to avoid the past mistakes of failing to exercise its right to appoint an arbitrator as this is a critical aspect of the arbitral process. He stressed that there is the need for local counsel or firms with expertise in international arbitration to complement the work of the Attorney-General’s department and any foreign counsel or firm. Plus, and probably most importantly of all, the need to repose greater confidence in local counsel and firms when dealing with international arbitration claims.