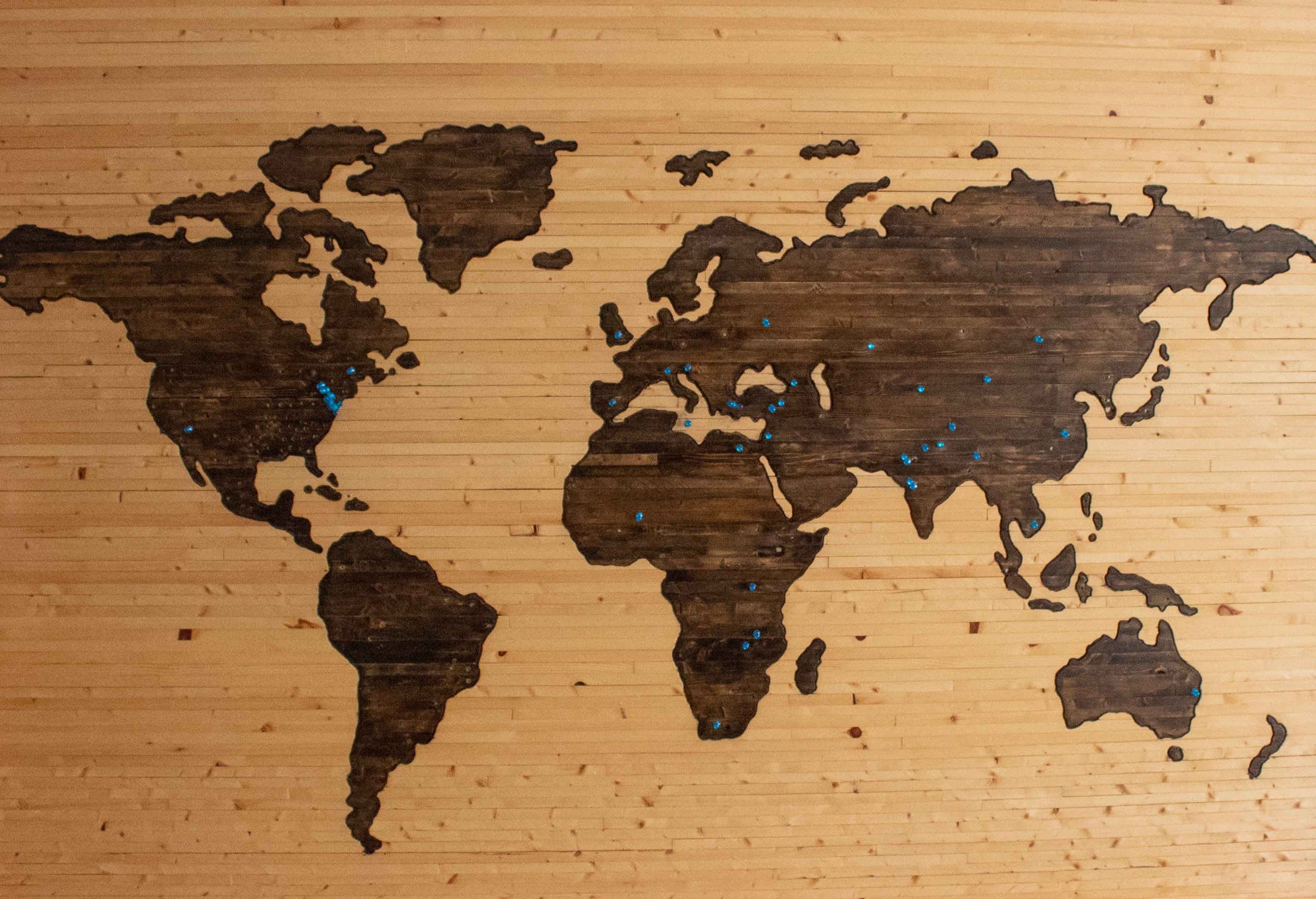 The Ghana Law Hub believes that readers can benefit immensely from knowing about case law from other countries. This is why it has decided to launch the “World Case Basket.” The first of this “World Case Basket” focuses on decisions from South Africa, the United Kingdom, Kenya, Canada and the Judicial Committee of the Privy Council. We hope you find this edition useful and by all means feel free to give us feedback.

South Africa’s Constitutional Court in President of the Republic of South Africa v Democratic Alliance and Others[1] has held that a President’s decision to reshuffle members of his cabinet is not subject to judicial review. The question before the court was whether the decision of the President of South Africa to appoint and dismiss a Minister and his deputy could be reviewed and set aside. As pointed out earlier, the court did not think so.

By way of background, sometime in 2017, former President Jacob Zuma announced changes to his cabinet – including the removal of the country’s then finance minister and his deputy. The Democratic Alliance (DA) brought an action seeking a judicial review of the President’s decision. The DA specifically argued that the decision was unlawful and unconstitutional. The DA relied on a rule which required review of decisions of inferior courts, tribunals, board, and officers performing judicial, quasi-judicial or administrative functions. The constitutional court found that the President’s decision to reshuffle his cabinet was not judicial, quasi-judicial or administrative.

InFreedom of Religion South Africa v Minister of Justice and Constitutional Development and Others[2], the South African constitutional court declared parental beating, as a means of discipline, a form of violence prohibited under the South African Constitution. The facts are straight forward. A father was on trial for assaulting his son. This was after he found the son watching pornography. The father was convicted. And he appealed. The question before the constitutional court was whether the common law defence of reasonable and moderate chastisement (as a form of discipline) is constitutionally valid. The court came to the conclusion that even moderate and reasonable chastisement is in breach of the constitutional provision which shields persons from all forms of violence from either public or private sources. The Court noted that violence and reasonable chastisement shared some common goals and aims such as causing displeasure, discomfort, fear or hurt.

Privy Council: Can two or more separate  articles put together  found an action in defamation?

The Privy Council in Simon & Ors v Lyder & Anor[3] seems to think so (in principle). Here is the problem. The appellants published four separate article (A, B, C, D) at different points in time in relation to a police shooting incident. Article A and B were published a day after each other. Article A and B did not identify the claimants. Articles C and D, published later, identified the claimants. The claimants’ case was that – “article A, B, C and D ought to be read together.” That way, it will be clear that the authors were referring to them.

The judicial committee of the Privy Council acknowledged that the separate publications ought to be read as a whole (in order to find out if the publications were defamatory). In the words of Lord Briggs: “The question then is, do the reasonable readers of the two statements, if aggregated in their minds, come away with a perception that the common maker of those statements is, by the time of the second of them, asserting matters defamatory of the claimants. If the effect of the second statement (or group of statements) is to take away the defamatory sting in the first, then the aggregation may well not be defamatory taken as a whole.”

This might probably be the most popular of this selection for obvious reasons. Even though it is about Brexit, it is not really about Brexit – so says the court. As you may well know, the UK prime minister advised the Queen to suspend parliament. She followed the advice. And suspended parliament. A series of legal action ensued. The key question in those disputes was whether the Prime Minister’s advice to the Queen to prorogue Parliament for almost 5 weeks was lawful. According to the Attorney-General, the prime ministers advice to the Queen did not raise any legal question on which the court could properly adjudicate. The UK supreme Court, pointed out that a legal dispute concerning the conduct of politicians or arising from a matter of political controversy has never been a sufficient reason for the courts to refuse to consider it. The court also noted that the fact that a minister is accountable to parliament does not mean that he is not accountable to the court.  In the view of the court, even though parliament cannot be in session forever, the longer that parliament stood prorogued, the greater the risk that responsible government may be replaced by unaccountable government.

Supreme Court of Canada: Is a lawyer liable for recommending a fraudulent financial advisor?

Well … it depends. In Salomon v Matte-Thompson[4], a lawyer introduced two clients to his financial advisor and personal friend. He recommendedthat they consult him.  The clients ended up investing over $7.5 million with the recommended financial advisor’s investment firm. The lawyer repeatedly endorsed the financial advisor and encouraged his clients to make and retain investments with the investment firm. In 2007, the recommended advisor and his associate disappeared with the savings of around 100 investors, including those of the lawyer’s clients. The clients instituted legal proceedings, claiming that the lawyer and his law firm were professionally negligent in two ways: first by breaching their duty to advise them and second, by disregarding their duty of loyalty to them.

The Supreme Court noted that lawyers who refer clients to other professionals or advisors must be convinced that the professionals or advisors to whom they refer clients are sufficiently competent to fulfil the contemplated mandates. The court further stated that “referral is not a guarantee of the services rendered by the professional or advisor to whom the client is referred, but it is also not a shield against liability for other wrongful acts committed by the referring lawyer”. The court found in this case that the lawyer had done far more than merely make a referral. He and his firm were bound to compensate the client for their loss.

UK Supreme Court: When does an agent’s commission arise?

The Supreme Court of the United Kingdom in the case of Wells v Devani[5]affirmed the long standing principle that an estate agent is entitled to his commission once the prospective buyer bought the property. D was an estate agent. And W had a property he was struggling to sell. The parties entered into an oral agreement. But the agreement did not specify the circumstances under which D’s entitlement to commission would arise. D worked his magic and the property was bought. W was unwilling to pay the commission. The UK Supreme Court was willing to imply a term that amount became payable once the property was bought.

As Lord Kitchin noted: “It may be an express term of the bargain that the commission is payable upon the introduction of a prospective purchaser who expresses a willingness to buy at the asking price, or it may be an express term that it is payable upon exchange of contracts. But if, as here, there is no such express term and the bargain is, in substance, “find me a purchaser” and the agent introduces a prospective purchaser to whom the property is sold, then a reasonable person would understand that the parties intended the commission to be payable on completion and from the proceeds of sale.” Because the parties did not specify the exact event that would trigger payment, the court was willing to imply a term into the contract: “In my judgment, the obligation to make payment of the commission on completion would be what was required to give the agreement business efficacy, and would not go beyond what was necessary for that purpose”, Lord Kitchin noted.

In Denis v Côté[6], the Supreme Court of Canada noted that a decision to compel a journalist to disclose his source required the balancing of a number of interests: “This balancing exercise requires considering, on the one hand, the importance of the document or information being sought to a central issue in the proceeding and, on the other hand, the impact on freedom of the press and on the journalist and the source.”

A journalist, in this case, was served with a subpoena to disclose the source of information that the journalist had published in an investigative piece. The Canadian Supreme Court held that the order requiring disclosure should be set aside. In the thinking of the court, a “party seeking the disclosure of information or a document that identifies or is likely to identify a journalistic source must show that the disclosure is reasonably necessary, that is, the information being sought, cannot be produced in evidence by any other reasonable means. If that is not shown, the case is closed, and the application for disclosure will be dismissed. If the party seeking the disclosure of information meets this requirement, he or she must convince the court that public interest in the administration of justice outweighs the public interest in preserving the confidentiality of .”

Well, the conclusion reached by the Kenyan Supreme Court[7]is that the un-utilised land does remains a public land; cannot be validly transferred for a private enterprise. This matter can be traced to 1978 when the government of Kenya compulsorily acquired two different pieces of land for a sugarscheme project and another for a township expansion project associated with the sugar scheme project. Though the sugar scheme project was executed, part of the lands for the town expansion project remained un-utilised. The original owners therefore brought an action seeking a declaration that once the land acquired was not used for the purpose for which it was acquired, the reversion ought to go back to them. According to the court, the key question was: “whether a proprietor whose land had been compulsorily acquired, nonetheless retains some reversionary interest in, or pre-emptive rights over the un-utilised portion thereof.” The court was of the opinion that the respondents did not have any reversionary interest in the un-utilised piece of land. The court went on to note that land which has been compulsorily acquired must be used for the purpose for which it was acquired and therefore “if for example, after compulsorily acquiring the land, the government or any of its agencies proceed to allocate the said lands to individuals or other entities, for their own private benefit in total disregard of the public purpose, such an allocation would not confer good title.”

Samuel Alesu-Dordzi is an Editor of the Ghana Law Hub.
NEWER POSTInjunctions Pending Appeal: When and How To Invoke The Jurisdiction Of Appellate Courts
OLDER POSTCourt Awards Punitive Costs Against Lawyer for Frivolous and Time-barred Suit