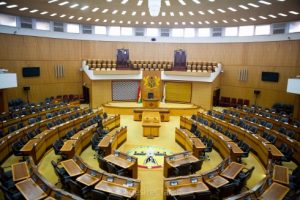 What is however not clear is the procedure for the termination of such contracts. Do these agreements need to be returned to Parliament in order for them to be terminated?

On 20th April 2016, the Supreme Court in John Akparibo Ndebugri v Attorney General & 2 Ors[1] held that parliamentary approval was required for the termination of an agreement ratified by Parliament. The question before the Court was whether a natural resource exploitation transaction ratified by Parliament required parliamentary approval before its termination.

The relevant facts are that on or about the 24th day of October, 2008 the Government of Ghana entered into a Petroleum Exploration Agreement with a Norwegian company and a local company. In line with the constitution, the agreement was placed before Parliament and was duly ratified.

Subsequently, the Ghana National Petroleum Corporation (GNPC) advised the Minister for Energy that the agreement violated the country’s petroleum exploration laws. Acting on this advice the Minister for Energy together with the GNPC, on one side, opened termination talks with the Defendants. The parties agreed upon terms of termination. They also agreed on the payment of the sum of twenty-nine million US dollars ($29,000,000.00) by the GNPC to the Norwegian Company, which was required to surrender to the GNPC seismic data gathered by them from their operation of the oilfield under the agreement. The termination agreement was not referred to Parliament for approval.  The Plaintiff was of the view that the action of the Minister was wrongful as same was in violation of Article 268(1)[2] of the Constitution.

The majority were of the view that since the Constitution is silent on what happens if it becomes necessary to vary or terminate an agreement after it has been ratified by Parliament, it is reasonable to suggest that all the parties involved in the agreement should have a say in its termination. They further pointed out that there was no justification to rule out any of the parties, which brought the contract into fruition.

The Court justified the intervention of Parliament in the termination of a ratified agreement on the ground that the executive could revise the terms of the agreement or even terminate it altogether for political or other reasons which have nothing to do with the efficient execution of the contract, thereby rendering ineffectual what Parliament had ratified.

According to Benin JSC, the requirement of seeking parliamentary approval “is to enhance transparency and expansive participation in matters involving the nation’s natural resources. Hence it was considered unwise and unsafe to entrust that responsibility to the executive alone, which by practice of party politics, which the Constitution permits, may be formed by only one party at any given time.”

Atuguba JSC was in the minority. He argued that the executive was entitled to terminate the agreement without recourse to Parliament as “the context of the constitution militates against the notion that Parliament must be resorted to in case of the termination of a parliamentarily approved transaction”. He also stressed that “there is no such parliamentary reversionary interest in respect of the several instances of parliamentary approval, in the constitution”.

[2] Any transaction, contract or undertaking involving the grant of a right or concession by or on behalf of any person including the Government of Ghana, to any other person or body of persons howsoever described, for the exploitation of any mineral, water or other natural resource of Ghana made or entered into after the coming into force of this Constitution shall be subject to ratification by Parliament

Samuel Alesu-Dordzi is an Editor of the Ghana Law Hub.
NEWER POSTMaking Things Anew: A Review of The Supreme Court’s Approach To Constitutional Infractions
OLDER POSTWhy entry of Conditional Appearance (without more) will not do!