Making Things Anew: A Review of The Supreme Court’s Approach To Constitutional Infractions 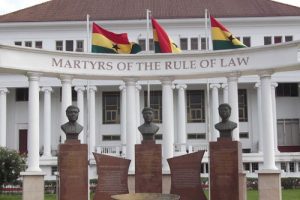 In the well known case of Marbury v Madison[1], Chief Justice Marshall counsels: “certainly all those who have framed written constitutions contemplate them as forming the fundamental and paramount law of the nation, and consequently the theory of every such government must be, that an act of the legislature repugnant to the constitution is void”. The supremacy of the 1992 Constitution is encapsulated in Article 1(2), the idea being: every governmental or administrative action must be consistent with the provisions of the Constitution; else be declared void.

Pursuant to Article 2 and 130 of the Constitution, the Supreme Court is clothed with the power to strike down any positive act, omission or legislation, which is inconsistent with the Constitution. This power has ensured incremental changes in our polity. Changes such as the right to demonstrate without police permit; right to join any lawful association and right as citizen to enforce the constitution without having a comity of interest have all been made possible by judicial intervention.

Under our laws, legislations can only be prospective. The only exceptions are fiscal or procedural legislations.[3] In enforcing the constitution, the Supreme Court by implication makes law. It then gives certain orders which have the effect of being prospective and retrospective. In Tuffour v Attorney-General[4], the court held that that any act or conduct that was contrary to the express or implied provisions of the Constitution cannot be validated by equitable doctrines of estoppel. Thus one cannot remedy an unconstitutional act on the basis of past actions.

In a series of cases before the Supreme Court[5] the court was emphatic that non-compliance with Article 181 renders an international business transaction entered into by the Government of Ghana void. In Martin Amidu v Attorney-General & Ors[6], Woyome argued that the Court should uphold its decision in City & Country Waste Ltd[7] in which it awarded the appellants damages for breach of contract even though the contract was found to be illegal. The court declined and held that there should be less room to award a restitutionary remedy where the breach is of a constitutional provision. Date-Bah JSC stated: “A contract which breaches article 181(5) of the Constitution is null and void and therefore creates no rights….The supremacy of the Constitution in the hierarchy of legal norms in the legal system has to be preserved and jealously guarded”. These positions of the court were consistent with the Tuffour principle.

The Election Petition case in 2013 and subsequent cases suggest a watered-down approach in the treatment of constitutional violations. In Paul Uter Dery v Tiger Eye P.I. & Ors[8] the Court upheld the decision of the GBA[9] and Agyei-Twum[10] cases with regards to the meaning and effect of Article 146(8) of the Constitution. The court held that a:

“disclosure of the contents of the petition to persons who are not entitled to receive them, that is persons besides the President, the Chief Justice and members of the committee that is set up to investigate the complaint, will be contrary to Article 146(8) of the Constitution”.

However, the court balanced the public’s right to information and the confidentiality of the proceedings with respect to the removal of judges. The court explained that the public’s right to information was not curtailed but was rather postponed until the Chief Justice’s committee concluded its work. Once the committee submitted its report the constitutional injunction was no longer applicable.

The court formulated a new rule and held that publication of the proceedings by Anas Aremeyaw and his team in the media did not nullify the entire proceedings began by the Chief Justice although the publication violated the Constitution. In applying principles espoused in cases[11] decided previously by the court, the court stated: “it is not every violation of a constitutional provision which results in the annulment of the action.” It further stated that its position is supported by legal as well as public policy considerations in avoiding an interpretation that will invalidate the proceedings began by the Chief Justice. It therefore held that the 1992 Constitution does not provide any penalty for unconstitutional disclosure and does not also afford any remedies that are available to a party affected by the disclosure. Unlike other countries where, outside the Constitution, there is legislation in place that prescribes what the consequences will be for violating the in camera proceedings provisions, Ghana has no such legislation.

Justice Gbadegbe held in the Asare case that “the authority conferred on us by article 2(2) is intended to be exercised creatively in order to enable us do justice on case by case basis. Ordinarily, declarations of inconsistency result in avoiding acts and or omissions founded thereon”. Article 2 may be applied either prospectively or retrospectively or both. It is in this light and the consistency in the treatment of constitutional violations in the last few years that the orders made in the Asare case are prospective and hinged on the General Legal Council formulating the necessary regulations within six months for the regulation of legal education in Ghana.

Recently in upholding the sanctity of citizens’ right to vote, the Court in Abu Ramadan v Electoral Commission[12] saved millions of citizens from being disenfranchised by applying the constitution prospectively. The Supreme Court has made things anew, let’s enjoy while it lasts.