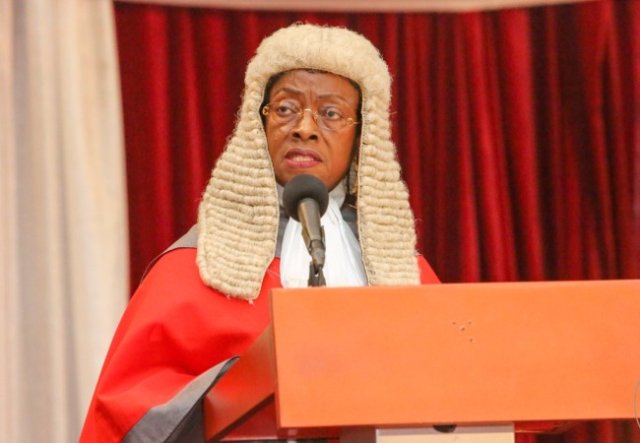 20 December 2019. This is the day Ghana’s 13th Chief Justice bows out after 24 years at the Supreme Court. And she chose a fine time to leave as 20 December also is her birthday. She has had a stellar career and has been blessed with the fortune of serving with the African Court on Human and People’s Right serving as both its vice president in 2008 and its president in 2012.

Many agree that she was an excellent judge and jurist. And her decisions, even her dissent, are often the subject of conversations around the water cooler. It is often difficult to nail down exactly what a judge’s judicial philosophy is. But if her decisions are anything to go by, then her judicial philosophy can simply be summed as “enabling justice without falling for technicalities and unnecessary legal complications.”

In the supreme court decision of Amuzu v Oklikah[1], Akuffo JSC (as she then was) recognised that well intentioned statutes, like all good implements, may be objects of destruction and injustice in the wrong hands. She therefore decried the use of laws passed by parliaments as instruments for the perpetuation of fraud. “I would also add that no law can be applied so as to yield […] an absurd result[2]”, she said.

Her judicial philosophy, further comes alive in cases such as Awuni v West African Examination Council[3] and Okofoh Estates v. Modern Signs Ltd[4].  The Awuni case involved students declared by WAEC as exam cheats and punished (without a hearing). The Plaintiffs (students) sued. Their main plaint: WAEC’s conduct breached the administrative justice rules set out in the 1992 constitution. In spite of the wrong committed by WAEC, a procedural issue stood between the Plaintiffs and their access to justice. But Akuffo JSC, did not let the procedural complaints defeat the call for substantive justice.

The Okofoh Estate Case, was in part a battle of form. One of the questions before Justice Sophia Akuffo was whether the wrong titling of a court process was fatal. Her ladyship did not think so. She reminded herself of the court’s duty to do substantial justice at all times and not be side-tracked by unnecessary technicalities. “It is my opinion that what is more important is whether the application has any substance, regardless of the form in which it has been intituled. In my respectful view, the wrong heading of an application to this court…cannot in any material manner derogate from the nature of the application itself”, she said, dusting her coat and moving on to the other issues.

As a testament of her abhorrence for the use of legitimate technical points to delay justice, Her ladyship in Soon Boon Seo v Gateway Worship Centre[5] reprimanded a lawyer who for the first time, in the supreme court, challenged the jurisdiction of the trial circuit court. Her ladyship said:

“Taking into account the nature of the claims endorsed on the writ before the Circuit Court, it is rather puzzling that neither in the Circuit Court nor in the Court of Appeal did the Appellant raise this matter. We deplore such lack of diligence which could lead to wastage of the time and other resources of the court and parties, since jurisdiction is fundamental to the validity of a court’s judicial activity.”

And occasionally, she makes comments that reflect her thoughts and mind on wider societal issues and challenges. In the Amuzu v Oklikah case instance, Akuffo JSC discussing the challenges with the acquisition of land noted:

“one of the banes of our current society is the frequency with which vendors of land, motivated by greed and venality, purport to sell the same property over and over again to multiple purchases. Frequently, it is only the vendor who comes out smiling, having collected his money from the victims. Sometimes… such a vendor, with his loot I hand, vanishes from the scene, leaving his victims to spend vast amounts of valuable time and money fighting over the property.”

Her Ladyship is also a strong advocate of the judiciary, its independence as well as its image. And she did not miss the opportunity to make that clear when the chance presented itself in the case of Abu Ramadan & Nimako v The Electoral Commission[6]. Three persons, in this case, were hauled before the Supreme Court on contempt charges. Two of these three persons were guests on a radio show. The other was a radio host. The two said very incendiary and unfortunate things about the then Chief Justice and the Judiciary. And the radio show host, rather than moderating and ensuring decorum, urged them on to “biegya” or “open fire.” Of the radio show host she said:

“he spurred them on to ‘open the fire’, adding his own vicious words to theirs, in the most disrespectful and deadly terms. He was heard, in the recording, ranting and raging in the most unmeasured terms against the Judiciary. That is not the proper role of the host of a radio station programme…”

In spite of the mea culpa from the contemnors and the plea of mitigation from their lawyers, Justice Sophia Akuffo explained why the supreme court and the judiciary needed to make a clear statement to avoid the recurrence of similar issues:

“[W]e realise that reckless attacks on judges of this court in particular and the Judiciary in general have become rampant in recent times and appear to be escalating in outrageousness and temerity. We need to make it universally unattractive for any person to indulge in such conduct. Despite the fact that four persons were punished for contempt of this Court during the Presidential Election Petition hearings in 2013, we have noticed a resurgence of contumacious statements about the court that have the tendency to bring the administration of justice into disrepute. We need to remind people who decide to criticize the Judiciary that within the right to publish and transmit, within the freedom of expression, there is a line that ought not to be crossed.”

Her valedictory judgment in Martin Kpebu v. The Attorney-General[7] perfectly sums up her “enabling justice without falling for technicalities and unnecessary legal complications” philosophy. The issue before the court was whether the 48-hour rule in the Article 14(3) of the 1992 Constitution (which provides that a person shall not be be held by the police for more than 48 hours without a day in court) included weekends and public holidays. She took the the constitutional provision, turned down the Attorney-General’s invitation to water down its clear terms and presented it as it ought to be presented. She clearly identified what was at stake. For her, “human life and liberty are too precious” to be sacrificed on grounds of “inconvenience, incongruity or difficulty.” Holidays, civil unrests, legal or illegal strikes, according to her, should not prevent a person from accessing justice. If it comes to that, she directed judges and magistrates to hold proceedings either in their chambers or their homes.

As Chief Justice, she was instrumental in pushing the e-justice agenda in the judiciary a notch higher by building the foundation for the eventual paperless process of dealing and interacting with the courts. She was also concerned about the image of the courts; and how it looks like. She was the only Chief Justice to have toured all the courts in this country. Going back to her swearing-in ceremony, she outlined the following as her key areas of focus. She said:

“The vetting process last week brought into perspective several matters about the judiciary which the good people of Ghana have concerns. These include the integrity of the judiciary and the perception of corruption, political influences and other influences on the judiciary, the conditions of service of judges and magistrates, infrastructure of the judicial service, that is and residencies, delays in justice delivery, loss of confidence in the justice system, and related issue of mob action, conduct of the members of the bar, and legal education in Ghana. These are major issues I will address and find solutions to.”

And she saw some of these through. She is reputed for closing down certain courts on the grounds that they were not befitting of the judiciary. And she deserves commendation for steering and instilling confidence in the judiciary – having come into office not long after a massive judicial corruption exposé.

Legal education was, however, her Achilles heels. She will be remembered for her good intentioned attempts at ensuring that only quality students get into the law school. But this approach had the effect of excluding many qualified candidates. The Ghana School of Law’s iron gate policy inadvertently led many good students to seek legal education in the Gambia, Nigeria and other commonwealth countries. The Ghana School of law, under her tenure, recorded mass failures in its professional examinations.  Students had to pay as much as GHS 3000 for the remarking of a script – leaving those who desired to challenge their exams results with cold feet. But reforms are gradual. And it may take a bit of time to find out what works best.

Ghana is grateful for the Chief Justice’s contribution to ensuring justice both at home and abroad. She has served this nation well and deserves a good rest. I wish her the best in all her future endeavours – especially in the areas of mentoring and promoting excellence in the youth.